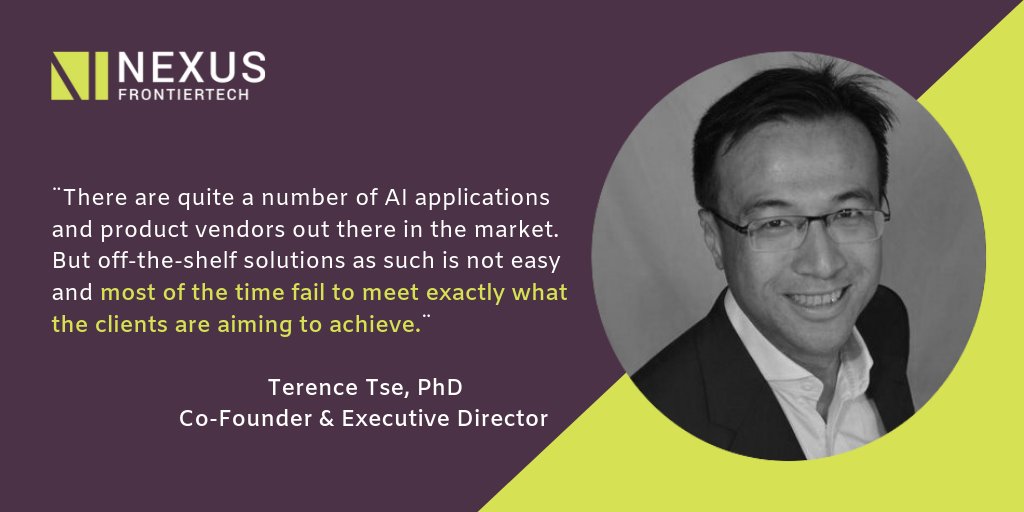 Based in London, Terence has been an educator, keynote speaker and commentator as well as advisor working with businesses around the world and the EU, UN and the World Economic Forum. He is the co-author of the bestsellers Understanding How the Future Unfolds: Using Drive to Harness the Power of Today’s Megatrends and The AI Republic: Building the Nexus Between Humans and Intelligent Automation. Nexus Frontier Tech is his second venture.

You have a strong background in higher education, having worked in various roles at top universities such as Cambridge Judge Business School and ESPC Europe. What was the idea behind co-founding an AI startup? Have you always been interested in tech and startups?

Like many things in our lives, co-founding Nexus is made up of coincidence. After I have written the book “Understanding How the Future Unfolds: Using Drive to Harness the Power of Today’s Megatrends” with Mark Exposito, I started to appreciate a lot more about what technologies can do and how they have embedded in our lives and driving the future. A very strong interest in the latest technologies was also developing. So, when Danny had read an article I co-wrote with Mark on AI, he asked me to meet up as he was starting an outfit based on this technology in the UK. The result was Nexus FrontierTech.

What do you consider the biggest misconceptions both businesses and the general public have about AI?

Lots of people still don’t know what AI is truly capable of — very little. At the moment, it cannot even identify whether the image it is looking at is a dog or a cat. All it can do is to try to figure out whether a dog or no dog. If what it can achieve is limited, it is for sure not what many media outlets portray it to be. Understanding this is a good start. Another misconception, more in businesses, from our experience gained at Nexus FrontierTech, is that often the most difficult part of putting AI into operation is not the development of AI but rather customising it for the IT system of the clients. There are quite a number of AI applications/products vendors out there in the market. But off-the-shelf solutions as such would not easy – and most of the time fail – to meet exactly what the clients are aiming to achieve.

AI is considered a buzzword by many. Do you think it’s merited?

Yes. It is a buzzword. But for the wrong reason. It is a common term that people tend to use to describe machines doing human work. But ultimately, there is no intelligence in AI. In view of the current British politics, we know for sure that there is naturally stupidity, there is no intelligence in AI. This is because intelligence implies, creativity, problem-solving, empathy, to name of few. And machines can do none of them. I personally prefer to use terms like natural language processing or image recognition. Not only these terms are more precise in describing what machines can do and therefore not like an all-encompassing term like AI which can describe everything and nothing at the same time. Also, politicians read clickbaits. If we continue to use the term AI, they would likely think there are machines that are omnipotent and can many all the social problems.

What are the biggest challenges AI firms are facing when proposing business solutions to potential clients?

It is often taking the first step. While some companies have never tried and don’t know that much about AI, they are reluctant to put the technology to use. Not to mention is the fact that for AI to be fulfiling its full potential, it has to be customised. This often involves a great deal of work. Other times, we have also seen companies trying to deploy AI. Yet, they have spoken to the wrong vendors and the result is that they put the money in but not getting the value out or the vendor could only go as far as proof of concept stage. Consequently, they become disappointed and take a more cautious approach when trying to deploy AI again. Needless to say, they should have talked to Nexus FrontierTech first to avoid such disappointments.

You have co-authored a book, The AI Republic: Building the Nexus Between Humans and Intelligent Automation alongside Nexus CEO Danny Goh and Chief Learning Officer Mark Esposito, PhD. Can you give some insight into what you touch upon and its connection to Nexus’ current mission of democratising AI?

With the book, we would like to demystify AI, flashing out what it can and cannot really do. We also discuss how modern AI has got to where it is and explain some of the technical side of the technology. Since AI has got a huge impact to our world in the future, the book will also look at what governments should do and we as parents should do for our children.

Nexus’ mission is to democratise AI. What does this mean to you?

I am going to use an analogy that Danny has used. Remember those days when we were first introduced to the Internet? Way back then, if you were to put a website together, you would have to do a great deal of programming. And this is restricted to those who have got the skills and equipment to do. These days, building a website requires very little programming knowledge because we can now drag and drop using specific applications. When we say our mission is to democratise AI, what are doing is to offer an application. We hope that our Podder.ai will enable individual researchers/engineers to easily build AI products for their clients and making it easy for clients to accept and integrate 3rd party vendors’ AI offerings.

Where do you see Nexus in the next 10 years?

I really hope that we manage to democratise AI.